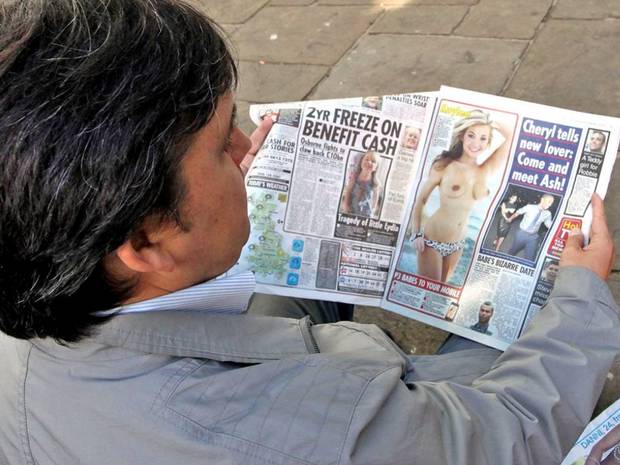 When I was a young girl – several thousand years ago – I was heart-clenchingly embarrassed by the newsagent top shelves and their smear of pouting, arching, private female flesh. I’d been taught that sex was a special, intimate thing that was shared by people who loved each other, so the cold public displays of female-only secondary sexual characteristics were a cringing mystery to me.

As children, we are learning machines, and as pubescent children we are fascinated by sex and relationships, so what was I to learn from this first glimpse of the way the world outside home and school treated sex? That ‘sex’ was synonymous with female display, for one thing. The mainstream magazines that were available to the average buyer did not show male display, nor did they show male and female interaction, so I was learning that the consumer of sex was male, and that the female was a product to be consumed.

But I understood this only on an emotional/unconscious level, of course. How it manifested was in embarrassment and a feeling of vulnerability. My child-brain wondered about the images of female nudity in the newsagent and how they seemed to waft sexual responses to female meat into the air around them. When men were looking at those images, I wondered, were they more likely to think about what was under the clothes of the women in the shop? As an awkward young girl, still coming to terms with (and feeling a little horrified by) ‘developing’ as a woman, it made me feel as if I was as much on display as those women who had chosen to be photographed. It made me feel exposed. It also made me feel as though I didn’t have full ownership over my own body. This may be difficult to understand if you’ve never been a trainee human in this situation, but it’s how I felt, and since I’ve been an adult, I’ve met other women and girls who also felt the same way.

Anyone who says porn doesn’t have any effect on our attitudes, feelings or behaviour must also believe that advertising is a complete waste of money. All media affects us. It must do, otherwise there’s no point in it. Huge industries spend millions on it and it can’t all be a mistake. Jehovah’s Witnesses have developed a printing empire based on the fact that if you keep people reading material with the same underlying messages, then they will keep believing it’s reality. If we keep absorbing repetitive underlying messages in our sexual material then we will keep believing that they represent real sexuality. In fact they’re even more powerful than religious indoctrination since they carry a sexual charge that seems to validate them as ‘truth’.

The essence of why I think Page 3 should go and that soft pornographic material shouldn’t be displayed where it can be seen unintentionally is to do with the way I think we learn our sexualities. Freud (who I often disagree with, of course, but I found this idea interesting) argued that humans are born what he called “polymorphously perverse.” What he means by this is that we are born capable of experiencing sexual responses and feelings, but that these are unfocused on any particular stimuli during childhood.

In order to explain fetishes, Freud argued that our experiences as we grow into fully developed sexual beings lead some people to attach sexual feelings to unexpected objects, like shoes or bannisters or the Eiffel Tower. But those of us who have more usual sexual experiences and input learn to attach our sexual feelings to more mundane things like other people. And we learn our preferences from the things that stir our sexual feelings in our early stages of development. That’s why some people find beards attractive and others hate them, some people like blondes and others don’t, some people like foot massages and others don’t, and so on. We’re learning from everything around us including the representations of sexuality we encounter in the media. In fact, in our much-vaunted media-saturated society, we probably now learn much more about notions of sexuality from the media than we do from anywhere else, especially when we are young.

There’s nothing intrinsically wrong with this, until we examine whether the messages about sex we are learning from our media are a real representation of free human sexuality, or whether they depict only one version of what sexuality is all about. Many claim that non-mainstream porn exists specifically to depict the entire cornucopia of human sexuality, and is thereby liberating, and that may well be true. For the sake of this discussion, however, I am looking only at mainstream, freely available soft porn such as Page 3 and lad’s mags, because it’s those that we are most frequently confronted with and therefore those that will have the biggest impact on our learning about sexuality. What these media seem to be teaching our young people is that no human is sexually desirable unless they are preened and pumped and smooth and flawless and firm and their sexual doings are as perfectly performed as the edited cavortings of the stars of an MTV music video. Media representations of sex seem to encourage people to see it as all about performance – how they look – rather than how they feel. I don’t see any real signs that the sexual expectations on young people are making them any more liberated than former generations who were, at least, free to have sex (or not) in their own actual skins. They were not led to believe they had to mould themselves into some sort of impossibly perfect (and expensive to maintain) ideal before they got their kit off.

I don’t want to ban porn at all, I just want it to be something people have to seek out rather than something that appears in front of our eyes whether we want it to or not. I want our children to learn about sex mainly from talking openly about it and experiencing relationships with other young people with real, lovely, imperfect, varied bodies and minds. I want them to understand that sex is fantastic and intimate and all about sharing your actual real self with another person (or people if that’s your thing), not about putting on a performance of an ideal imposed from outside. I want them to grow up knowing that sex is about feelings and not about how you look when you’re doing it. I don’t want our daughters to grow up feeling that the ultimate accolade is to look good naked so that men they would never want anywhere near them will drool over them. If our young people want to look at porn, it’s fine, but the act of having to go and find it in and of itself would show them that it is something different from everyday human sexual experience. Not wrong, just different. Doing this would hopefully lessen the influence of mainstream soft pornification on people’s individual sexualities and create more not less freedom of sexual expression.